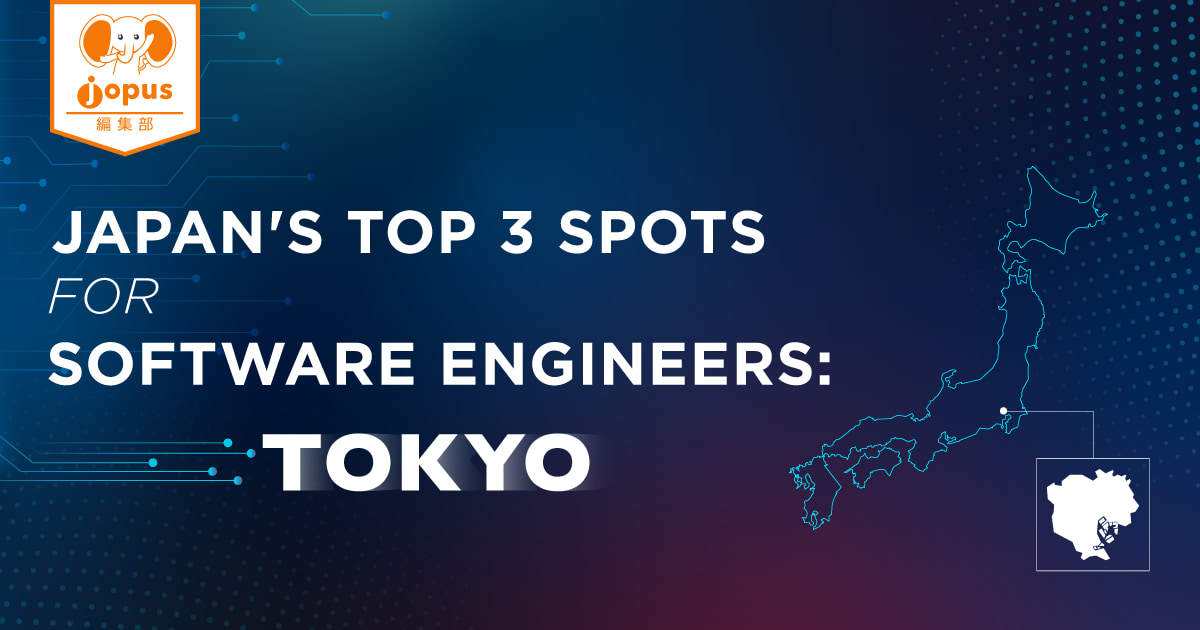 If you’re looking to work as a software engineer in Japan, you’ve probably wondered which area of the country would be ideal for setting down roots. Japan is home to several tech hubs, each of which acts as a base for various domestic and international tech companies. Software engineers will find a diverse range of jobs in a variety of verticals and environments in each of these regions. In this series of articles, we’ll look at the top three destinations for software engineers, beginning with Tokyo.

Tokyo, Japan’s capital city, is located in roughly the center of the Japanese archipelago. The metropolitan region encompasses a central area of 23 special wards, an outer area made up of several dozen municipalities, and a number of distant islands.

Though the city stretches across over 2,000 square kilometres, its IT hot spots are located fairly close together in five of the 23 special wards: Shibuya, Minato, Shinagawa, Chiyoda and Shinjuku. These wards are located along Tokyo’s loop line, the Yamanote Line, and are close to two international airports, making Tokyo a convenient home base for international workers.

With its history of being one of Tokyo’s most creative areas, it’s no surprise that Shibuya has been an important part of Japan’s tech landscape for decades. Nicknamed Bit Valley in the 1990s, it’s home to numerous corporate offices.

With Shibuya being a magnet for young people, it’s the perfect place for companies to not only keep up with the latest trends and scoop up the newest information, but also to source top-notch candidates for vacant positions. Not surprisingly, the ward boasts a high number of startups.

The most famous of the ward’s tech companies is Google, which moved its Japan headquarters from Roppongi to Shibuya in 2019, and which in 2020 opened the Tokyo campus of its Google for Startups programme.

Other companies to check out in Shibuya include CyberAgent, Japan’s leading mega-venture company with interests in TV, advertising and games; and GMO Internet Group, which deals in the full spectrum of internet services, including infrastructure, advertising, and cryptoassets.

Roppongi itself is a neighbourhood of contrasts. Known for its boisterous nightlife, high-end shopping and cultural offerings as well as for its business side, its many faces make it an exciting location to work, live and play.

Indeed, the completion of Roppongi Hills and other large office buildings around the station area have made it a prime gathering place for highly skilled people and a font of new information. Furthermore, Roppongi’s many restaurants and entertainment venues provide plentiful options when wining and dining clients.

Two of the world’s biggest tech giants, Apple and Facebook, have made Roppongi their Japan base, while e-commerce company Mercari, which operates in the United States as well as Japan and hires many non-Japanese software engineers, can be found in the neighbourhood as well. E-commerce, games and video-on-demand company DMM Group, and Baidu Japan—local subsidiary of China’s internet services and products giant Baidu—also call Roppongi home.

Shinagawa has long been associated with transportation, commerce and industry. Recently, it’s been able to add “tech centre” to its list of attributes thanks to the ward’s Gotanda neighbourhood which, since 2015, has seen an increase in the number of startups that call the area home. Reflecting this rise in prominence, the neighbourhood now bears the nickname “Gotanda Valley.”

With lower office rental costs than nearby Shibuya and Roppongi, Gotanda’s major draw is its affordability. Reasonable prices extend to the neighbourhood’s burgeoning entertainment and dining options as well.

Companies based in Gotanda include Freee, a leader in fintech providing cloud-based accounting and HR software; and Coconala, which operates online platforms for buying and selling knowledge, skills and experience among other ventures.

Centre of Government and Business: Chiyoda

Chiyoda sits in the centre of Tokyo and is home to the Imperial Palace, the National Diet Building, the Supreme Court and some of Tokyo’s most important business districts. Embassies, affluent neighbourhoods and restored samurai manors dot the ward, making it an interesting combination of old and new.

Blessed with abundant greenery in addition to all the conveniences expected in a city centre, the ward has much to offer to those who work and live there.

Numerous IT companies both domestic and international have offices in the area as well, including Salesforce, which specializes in customer relationship management services; SAP, a German producer of software for managing business processes; Nutanix, a cloud computing company providing software and cloud services among others; and UiPath, a software company for robotic process automation.

Bustling Shinjuku boasts more than just the world’s busiest train station; it also counts a solid number of tech companies within its borders. And despite its urban jungle image, Shinjuku also has some of the city’s finest parks, allowing for respite amongst the concrete.

As a major transportation hub, Shinjuku is convenient even for those living outside the central Tokyo area. Indeed, it’s relatively easy to live in the quieter western areas of the metropolis while making your living right in the thick of things.

Messaging app giant Line Corporation, which also deals in a variety of mobile-first services as well as advertising, fintech and artificial intelligence, is headquartered in the Yotsuya neighbourhood of Shinjuku.

Israeli software company Magic Software Enterprises, provider of software platforms for business integration and app development, can also be found in Shinjuku, as can Quest Software, which develops, produces and supports software for IT professionals.

Of course, tech companies can also be found outside the five wards mentioned here, including e-commerce titan Amazon, whose Japan headquarters are in Meguro.

Tokyo offers a huge range of possibilities for software engineers across a variety of verticals in both international and domestic companies. The city also provides a high level of liveability thanks to its world-class infrastructure, entertainment options, park system and international atmosphere.