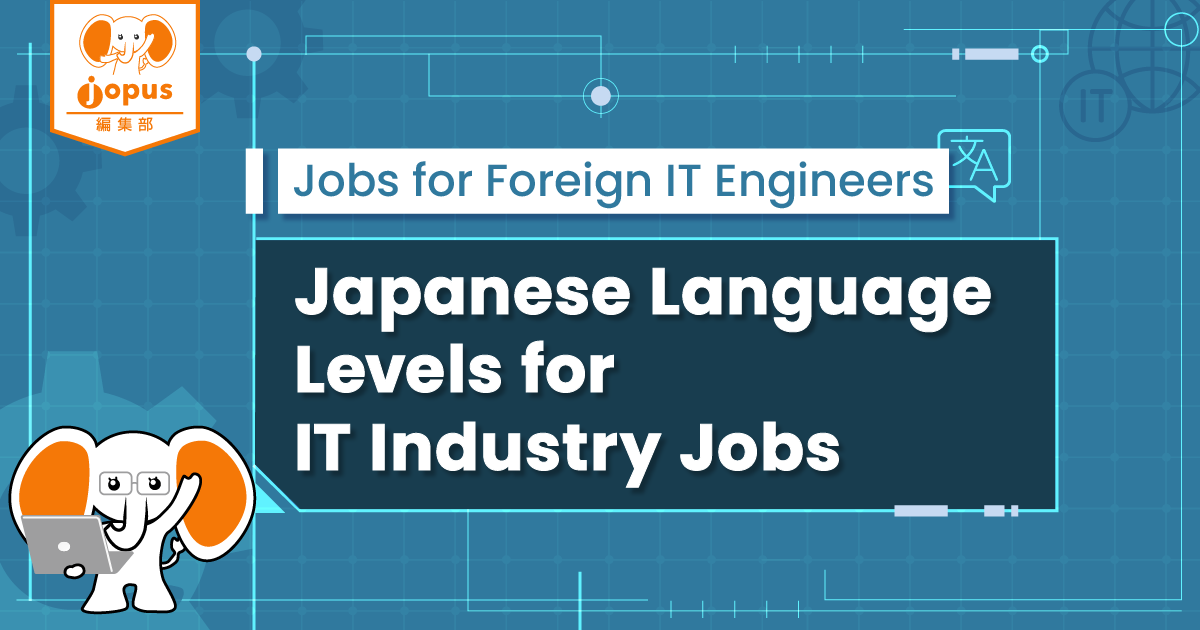 In recent years, the shortage of software engineers has become a more serious problem in Japan. While companies seek experienced talent, an increasing number are also hiring new graduates scheduled to complete university degrees in Japan or their home countries. That being said, many international job seekers may feel anxious about their Japanese language abilities. In this article, we will introduce the Japanese language levels that are needed to work in the Japanese IT industry.

Their current staff do not speak foreign languages

Across those in Asian countries, Japanese people have low English language abilities. Very few can speak English. According to a 2019 survey conducted by an international language education institution EF Education First, Japan ranks 53rd out of 100 countries/regions where English is not the native language. Furthermore, the survey categorizes Japan as level four (“low ability level”) on a five-level scale.

Communication with people outside the company is necessary

At work, one will need to listen to client opinions, answer questions, give reports, and communicate in-person with others. Those who communicate with clients regularly will be able to accurately pick up on their requests, leading to better work performance.

Many Japanese companies seek talent who can fluently communicate in Japanese with internal colleagues. Such requirements are reflected in differing ways on applicant requirement sections of job listings. For instance, one company may require applicants to have obtained “N2 or above on the Japanese Language Proficiency Test (JLPT).” In contrast, another company may require applicants—whether they have an official certification or not—to “speak at a fluent level.”

Japanese language skills are needed when working at many Japanese IT companies for conversing smoothly with other members, reading work instructions, and using chats.

Among foreign-affiliated companies or companies that employ many foreign engineers, some do not ask applicants for their Japanese language levels; however, most of these companies require applicants to have high engineering skill levels. Therefore, new graduates and less experienced foreign engineers who first endeavor to improve their Japanese abilities will enjoy a broader range of companies to apply to. Furthermore, having a JLPT certification is a strength one can emphasize during the job-hunting process. If you do not have a JLPT certificate but can communicate in Japanese at an appropriate level, try to see if a Japanese colleague can help edit and proofread your rirekisho or shokumukeirekisho.

One will need to have Japanese language abilities equivalent to the JLPT N1 level to work at companies requiring native proficiency. Most business positions requiring this level of language ability are project management and other management jobs. People in these higher-level positions will need fluent Japanese language proficiency to oversee Japanese members and communicate with external clients.

To work at companies requiring business level Japanese, one will need to have Japanese language abilities equivalent to the JLPT N2 level.  Positions that require this level of fluency are engineers and bridge engineers.

Bridge engineers will need to understand Japanese head offices and convey content to teams offshore. Additionally, many Japanese companies use Japanese as the common language to write work directions or perform tasks because they employ only a few foreign staff. As a result, one will need Japanese reading comprehension skills as well. For system engineering service (SES) jobs, one will also need business level proficiency at the Japanese companies they take up residency in.

For companies that require daily conversation language levels, one will need skills equivalent to the JLPT N3 level. Many of these companies have a number of foreign workers and teams that use a foreign language to conduct communication. Most jobs requiring daily conversation levels are engineering positions. While Japanese skill requirements are lower for these positions, applicants will need to show that they possess skills as an engineer.

Japanese may not be required at companies where the common in-house language is a foreign one (e.g., foreign-affiliated companies or companies that have engineering teams mainly comprised of foreigners). Rakuten and Mercari are leading examples, but only very few of these kinds of companies exist. Again, these types of companies will require high engineering skill levels.

Students with limited development experience (e.g., internships) or inexperienced software engineers should first aim to achieve Japanese language levels that allow one to read and write. JLPT qualifications are not a requirement, but the test is often used as a marker of one’s Japanese abilities during document screening processes. Therefore, obtaining JLPT certificates may help raise your chances of employment. If you are a software engineer, an N2 level should be sufficient. Ideally, you will want to pass the N1 level if you are attending a university in Japan. Before starting the job-hunting process, collect company information and look for opportunities that match your Japanese and engineering skill levels.