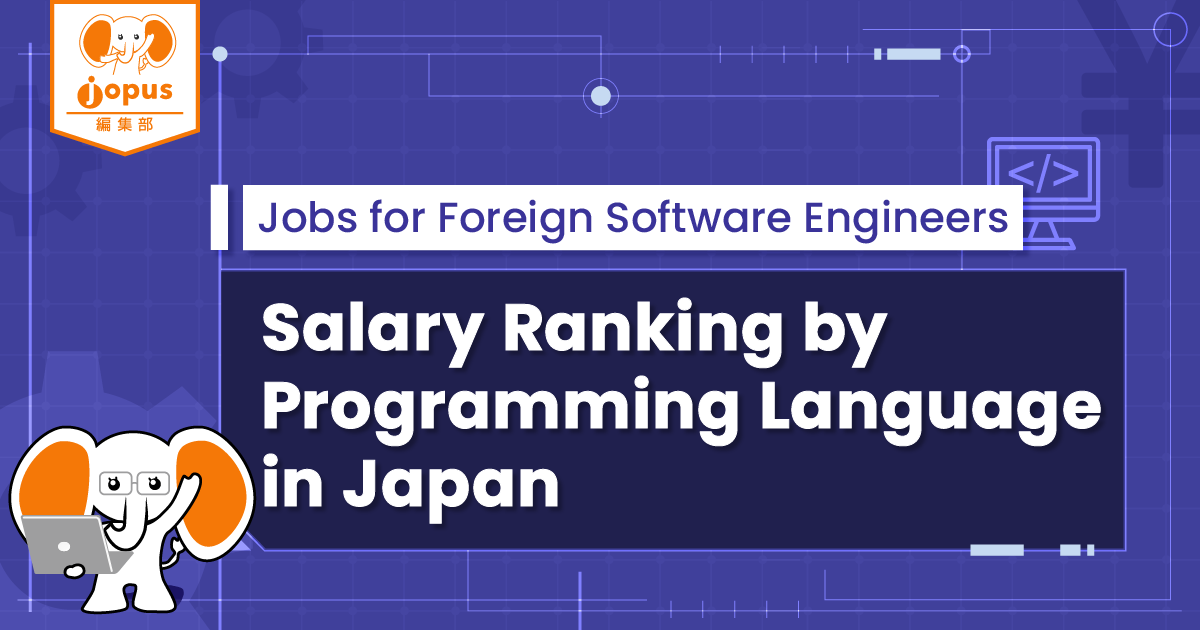 R is a programming language which is specialized in statistical analysis. It is utilized in the fields of machine learning and big data analysis. As it has a simple linguistic structure, its level of learning difficulty is not high. However, it seems to require knowledge of statistics and mathematics in order to use it well. The average annual salary for the job is between 4,747,434 and 8,311,375 yen.

Go is a programming language which was developed by Google in 2009. Since this language is rather easy for developers to program, it seems to be useful for them to develop systems with faster processing speed. Now that “5G (5th-generation mobile communications system)” is popular in a wide range of industries, Go is useful with its superiority in parallel processing because 5G requires processing a large amount of data at once. In addition, Go is considered to be required more in the future, as it is relatively easy to learn. The average annual salary is between 4,634,384 yen and 7,915,711 yen.

TypeScript, developed by Microsoft in 2012, is a programming language mainly used for the development of front-end. TypeScript is gaining attention since it was approved as a standard language within Google in 2017. It is in high demand due to the high learning cost and the rarity of  people who can develop in TypeScript. The average annual salary is between 4,605,892 yen and 7,875,212 yen.

2.Number of jobs by programming languages in Japan

Java is a language which has high versatility and works independently of OS. As it can break down a program in small sections and the development can also be divided into sections, Java is rather suitable for large-scale system development and therefore adopted in systems such as large-scale toB systems managed by system integrators and others. Since the language is used in various fields including those large systems and Android application development, a large number of jobs are available so that you will be able to have a wider selection of jobs by learning Java.

PHP is a programming language mainly used for web service and web application development. It is also used in the development of WordPress, a blogging software. PHP is widely used in the field of website development because of its rich development experience, which makes it safe to hire and easy to secure PHP engineers. In addition to PHP skills, HTML/CSS, JavaScript, MySQL, WordPress, etc., as well as experience in setting up and managing servers are often required.

If you participate in the development project of website application as a PHP engineer, you will be required to constantly brush up your skills.

JavaScript is a language that mainly operates on browsers, and it is essential to enable highly functional screen operation (UI/UX) in web services. As it has been used worldwide for a long time, there are many useful libraries and frameworks. In addition, since JavaScript is used in almost all websites and can be used for both front-end and server side, it is versatile and in high demand. However, there are many job posts which require engineers who have learned related knowledge as well, and in the case of front-end engineers, many companies tend to require knowledge of JavaScript, HTML5 and CSS3 as a set. In some cases, design knowledge such as for UX and UI are also required. For server-side engineers, knowledge including PHP and Linux are tend to be required since there are cases that development is done along with LAMP, which is a typical server-side technology.

Just because you are a foreigner, there is no programming language that you are specifically required to learn. But in order to develop your career to increase your income, it is a good idea to master Java, PHP and JavaScript which have many job postings. After that, you can learn R or Go languages, which are ranked top in the salary rankings, to appeal in the hiring process. In addition, continuous skill improvement is essential to increase software programmer’s annual income. Keep on learning and brushing up your skills in order to work actively in the rapidly changing IT industry.