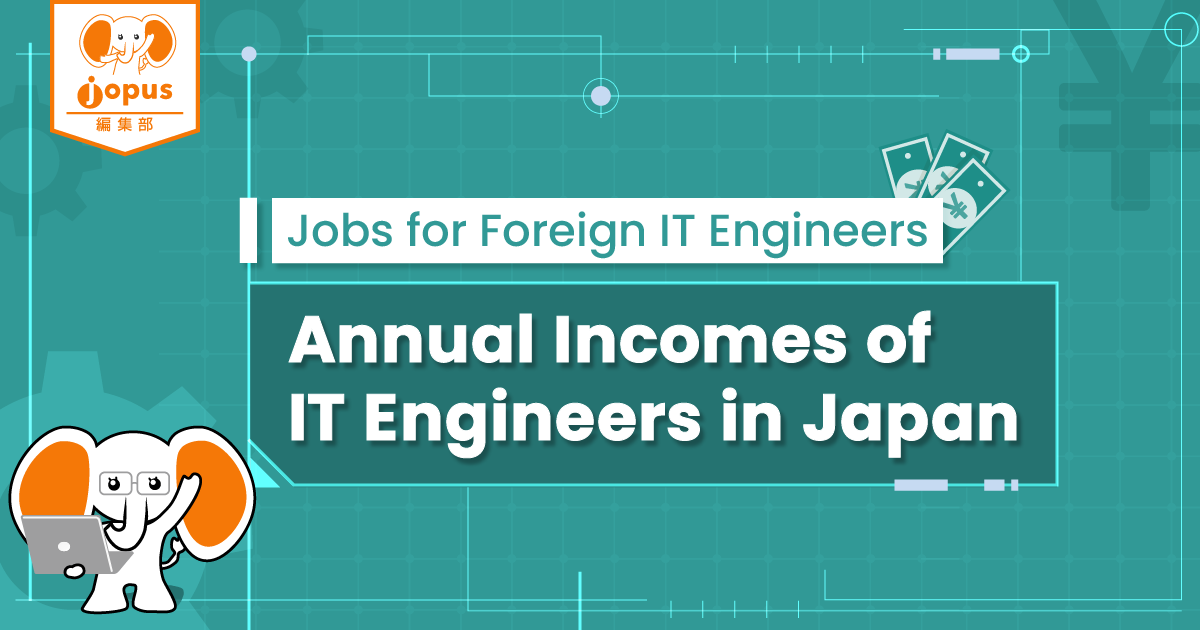 In the current Japanese IT industry, the shortage of talent has become a severe problem, and demand for foreign engineers is rising. However, it seems that there is a wide disparity across companies on whether they have the ability to pay salaries that fit the needs of foreign engineers. In this article, we will explain average annual incomes and salary ranges of software engineers in Japan. If you are looking to become an engineer in Japan, please use the following information as a personal reference.

Japan ranks 18th out of 92 countries

According to a survey conducted by Human Resocia, the average technician’s salary in Japan is 42,464 US dollars (approximately 4.3 million yen). This figure places Japan at 18th out of 92 countries in global salary rankings for IT technicians. Japan appears to rank high, but its average IT talent salary is half that in the United States (83,389 US dollars) and is lower than those in European countries.

The country that saw the highest year-on-year salary growth for IT technicians (38.3%) was Thailand. In second place is the northern European country Latvia, which experienced a 26.4% growth. Latvia also boasts the largest growing population of tech technicians. Qatar placed third with 25.1% growth and ranks fourth in the world for the average salary of workers in the ICT industry.  The IT technician salaries in Japan have increased by 5.9%, placing the country 20th in salary growth rates. Given that salaries for IT technicians in Japan are lower than those in the U.S. and European countries, it is difficult to say that this current growth is sufficient.

To increase productivity, Japan is making efforts towards introducing tech and digitalizing the country. However, the introduction of tech has not made much progress as of yet. Many companies are still against implementing technology. Some believe that not investing in tech will increase productivity. Others think that productivity would not rise even if they were to become more systemized. Under these kinds of circumstances, the progress of tech implementation and investments do not run as smoothly. Additionally, base salaries of tech talent are low because the market lacks experience.

The Japanese IT industry is numerous in small businesses because outsourcing development projects is a widespread practice. Characterized by a pyramid-structure, “multilayer subcontracting” is a system in which the main large company contractors who undertake work directly from ordering parties contracts out some of the work to secondary or tertiary subcontractors. Many intermediaries become involved within the process, so engineers belonging to lower levels of this pyramid will have smaller salaries.

In the United States and India, where companies compensate employees according to performance, annual incomes peak in one’s thirties. Conversely, many companies in Japan still practice seniority-based pay and promotion. Highly skilled talents have but few opportunities for large salaries if they have not worked at the same company for a long period of time. The IT industry is often thought of as more meritocratic than other industries, but seniority-based evaluation is still a deeply rooted practice.

2. Engineer salaries in Japan according to position

According to doda’s average annual income rankings, the average income across the Japanese IT industry is 4.52 million yen. Like in other countries, average IT consultant and product manager incomes are higher, ranging from 5.34 to 6.64 million yen.

Salary ranges for systems engineers, network engineers, and server engineers are wide as skill levels also vary greatly within these job titles. Average incomes range from 4.17 million to 4.63 million yen, but some companies pay even 8 million yen to employees with the appropriate skillset.

In contrast, many technical support engineers start off as inexperienced workers, so salaries are relatively lower (4.09 million yen).

Companies that develop services in-house are similar to western companies in that they understand the value of their software engineers and generally pay large salaries to highly skilled talent. In the Japanese IT industry, salaries vary across companies and job responsibilities, so carefully consider whether potential companies can provide the salary you want.