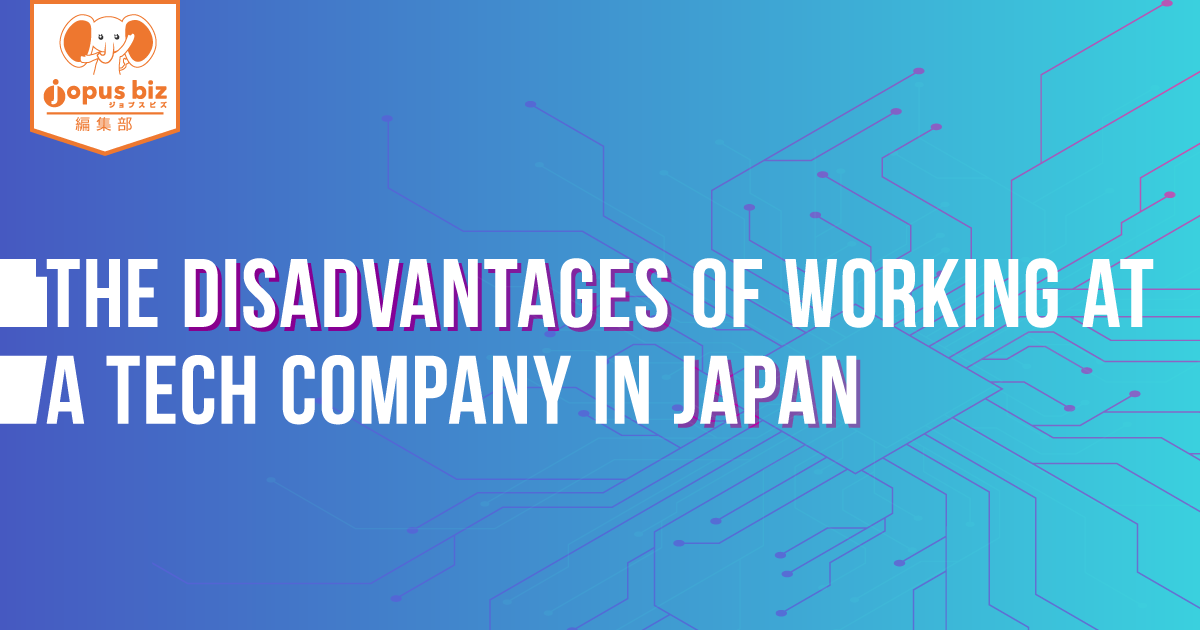 Living abroad and interested in a tech career in Japan? Or are you already living in Japan and thinking of finding work in Japan’s growing tech industry? In our previous post, we looked at some of the benefits of working at a tech company in Japan. In this article, we’ll discuss some of the disadvantages.

Perhaps one of the most noted downsides to working at tech companies in Japan is lower salary. While software engineers, developers and other IT professionals do earn some of the highest salaries in Japan, the amount is generally lower than in the West. (Even CEOs in Japan earn less than in the West, as one 2020 study explored!)

There are many reasons for this, far more than we could explain here. But perhaps the overarching explanation is that Japanese companies take a different approach to compensation altogether. Common to most industries in Japan is a tendency to link salary more to age and experience than skill. Even a highly qualified individual may find they are somewhat constrained by a pay category commensurate with his or her age. That’s not to say you cannot negotiate a higher salary, but don’t compare salaries in Japan with Silicon Valley or other tech hotspots.

In our previous post, we mentioned how there are many other benefits to working at a company besides just the salary itself, so make sure you look into other forms of indirect compensation such as commuting or housing allowances, as well as your cost of living. Still, on a strictly numbers basis, Japan does not have the highest rankings even when it comes to tech jobs.

Japan is famed for having a very high work ethic, and while that’s largely true, sometimes there is more than meets the eye. For example, employees in Japan tend to work longer hours than in other parts of the world, but this does not necessarily equate to higher efficiency.

In fact, a 2018 article in the Japan Times noted that, “Japan’s GDP per hour worked is the lowest in the G7, and lower than all major economies in the OECD except South Korea. Its productivity remains significantly lower than the United States at $63.26, the EU at $47.64, and roughly half that of top-ranked Ireland at $82.15.”

There are varying reasons for this discrepancy between productivity and time at work. For example, employees may feel obliged to stay in the office until the boss leaves first, resulting in staff pretending to be busy or simply passing the time. Or perhaps project deadlines and a shortage of labor may mean there’s actually more work than people to do it, making the amount of responsibility per employee significant. This problem is so serious that there is even a Japanese term karoshi, which means death by overwork!

Fortunately, Japan’s onerous work culture is gradually changing. The nation is becoming more and more sensitive to the problems of overwork and unpaid overtime, particularly with prominent cases of karoshi in recent years. Moreover, as a non-Japanese employee, you may not be expected to work those famously long hours. Still, you may find that, for example, a typical workday may last a few hours longer than officially stated, rather than ending promptly at a certain time every day.

Another facet of Japanese business culture concerns the physical layout of office space. Japanese offices often employ open layouts, with desks for different workgroups arranged together in different clusters, as opposed to a series of cubicles or individual offices. Instead of having mini borders around your office area or workspace, you may be sitting directly next to somebody else. Your computer screen(s) and desk space may be in full view of other people.

There are certainly benefits to this seeming lack of privacy – for one, the openness arguably facilitates communication and teamwork. Yet one of the drawbacks is that you may find there are more distractions, such as people walking around behind you, noisy office phones ringing, or nearby coworkers engaged in chatty conversation.

Increasingly, there has been a trend of allowing workers to work remotely and only require them to come to the office on limited days, if at all. However, the necessity of a corporate office and the importance of occasionally showing up are probably going to remain with us for the foreseeable future.

Not being able to speak Japanese is less of an issue for those interested in working in the tech industry in Japan. As we mentioned in our “benefits” post, many jobs do not require Japanese language skills. This is definitely an industry where the better your tech skills are, the more desirable of an employee you will be, regardless of your experience and familiarity with Japanese language and culture.

Nevertheless, as a foreigner working in a foreign land, Japanese language and communication style will still throw some challenges your way. Even if you are able to do your own work sufficiently, you may encounter issues when communicating with coworkers. Many Japanese are proficient in reading English to some extent, but speaking proficiency is quite another matter, owing to an educational system that emphasizes reading and writing ability over speaking and listening. A lack of smooth, natural communication with coworkers could be frustrating.

Beyond knowing what to say, it’s important to be sensitive to how and when you say it. Japanese communication is less direct than in English, and in the workplace, people tend not to express direct opinions, complain, or openly contradict others. Being human after all, the need to do so still exists, but Japanese would prefer to leave that sort of communication for informal times, such as after-work drinking parties.

This has just been an overview of the possible disadvantages to working within Japan’s tech industry. Before you make any employment decision, it’s worth remembering that your particular situation may be different. Not all of these aspects may apply to you, and if you are concerned about them, it’s good to bring them up with your possible employer in the recruitment process.