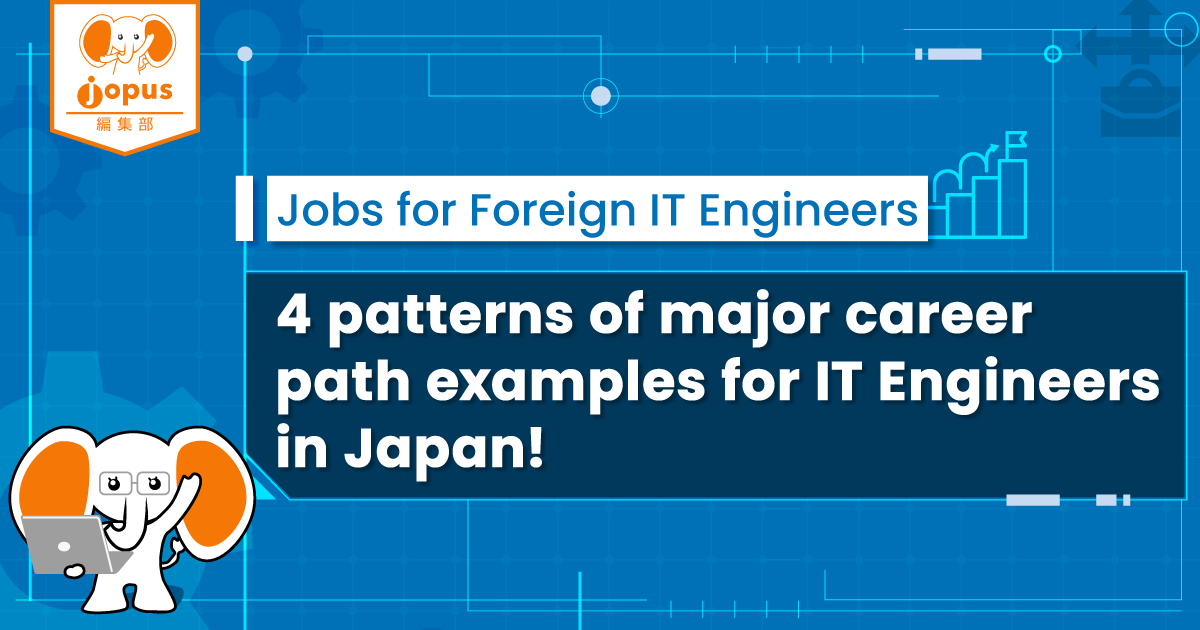 In the past, the career path for software engineers in Japan has generally been to start as a programmer (PG), and after gaining experience to become a system engineer (SE), project leader (PL) and project manager (PM). Many career paths have been rather management-oriented, with having a wider scope of team to manage in each step.

Typical career paths for the software engineer in Japan used to be basic and simple, such as steps from PG to PM. However, as the development of IT technology enabled diverse options, more people are considering their career path other than management, after they experienced PG and SE. In this section, we introduce individual job types which are now becoming mainstream.

Career path as a specialist

A full-stack engineer is an engineer who has mastered technical knowledge so that one can cover all the development on its own. Other than technical skills, this job is suitable for those who keep up with trends and movements of the IT industry and also have interests in new technologies and continuously improve their skills.

Tech lead is a type of job that works as a liaison between the engineer team and other divisions, etc. In addition to communication skills, tech lead requires high technical skills as a leader of an engineering team.

IT specialist is an engineer with a high level of specialty which meets level 3 or above in six specialty areas defined in Information Technology Skill Standards (ITSS). Since this job requires top-level knowledge in technology, there is a career path in which one starts as an SE who is in charge of upstream (earlier) process, and then as a PM to understand the whole project and to become IT specialist.

An AI engineer is an engineer who participates in the development of artificial intelligence (AI) which is a leading-edge technology. This job is mainly divided into two types: programming area and data analytics area. Since AI technology is in progress day by day, one needs to continuously update its knowledge.

Career path to the other job types

A data scientist is a profession that conducts information gathering and data analysis by utilizing big data. This job type requires knowledge in statistics and data mining. There is a career path that one works as an SE to be in charge of processes and become data scientist after learning statistics and pattern analysis.

A web director is a person who directs, manages and proceeds a project when building a website. Knowledge is often required especially in web marketing SEO, listing advertisement and SNS utilization.

In-house SE is an engineer who is in charge of structuring and managing the company’s internal systems and infrastructure as a multi-player of the in-house IT system. The job detail depends on companies but the range of work is wide.

Career options for software engineers are not only limited to web engineers but also freelance positions including IT instructors and technical writers. If you have been an employee in Japanese companies and if the freelance job details are almost the same as the one in your employee period, it seems rather easy to acquire a visa if you can make outsourcing contract agreement with the company you are offered to provide jobs.

With new technologies and new programming languages, there are a growing number of needs for higher specialty tech skills. Furthermore, as more companies have in-house IT divisions compared to the time before 2000 when SIers (system integration companies) were the mainstream, career paths of tech engineers in Japan have been diversified because of the need to respond to various requirements.

You may want to think about how you wish to make your career in Japan first, before considering job transfer or submitting requests to your company.