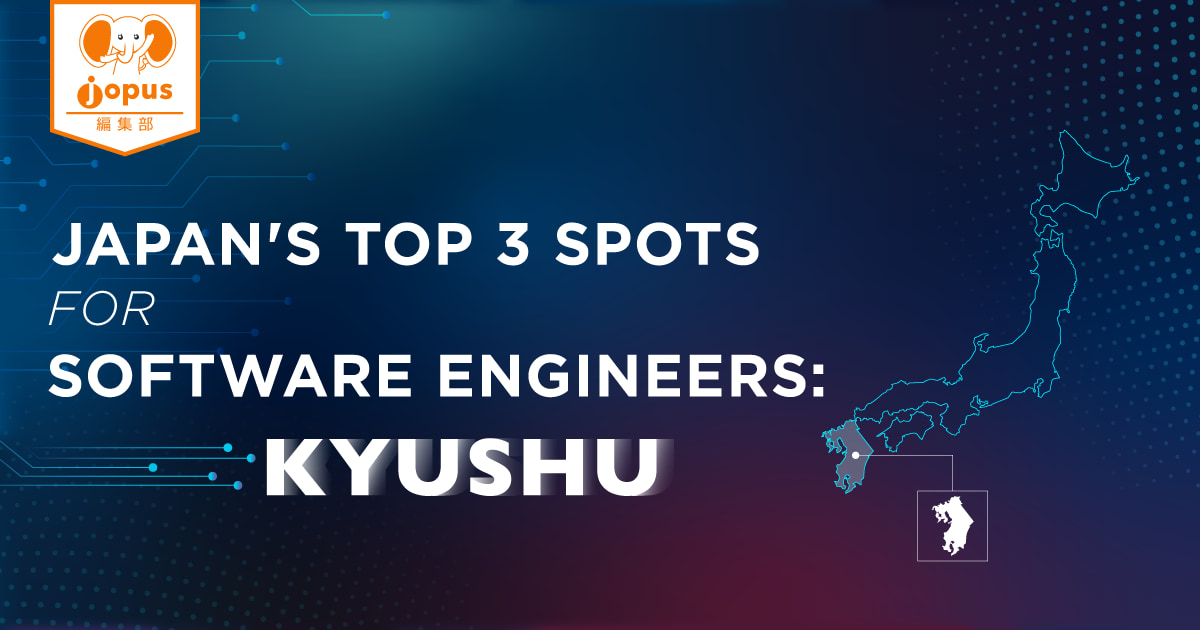 When looking to relocate to a new country, it’s easy to become overwhelmed by choice in the search for a city to call home. Add in requirements like liveability, accessibility and job prospects, and finding a place to set down roots becomes an even more difficult task.

In our three-part series on Japan’s top spots for software engineers, we’re introducing cities in three regions with thriving tech industries where you’ll find a variety of potential work opportunities. These cities boast extensive transportation networks, a combination of convenience, nature and culture, and their own unique charm.

Article one of the series looked at Tokyo, while article two explored opportunities in the Kansai region and the Tokai subregion. In this final article, we’ll be introducing you to Kyushu.

Kyushu, the third largest of Japan’s four main islands, is located southwest of the main and largest island of Honshu. With its geographical proximity to continental Asia facilitating trade, Kyushu has long been a hub for international exchange.

Indeed, its largest city, Fukuoka, is known as a gateway to Asia and continues to be an important economic centre in western Japan. It is in Fukuoka that software engineers will find a high concentration of IT companies at which to seek employment.

Fukuoka is the capital of Fukuoka Prefecture, the northernmost of Kyushu’s seven prefectures. The city is connected to Tokyo and Osaka by Shinkansen (5 hours and 2 hours and 30 minutes, respectively, from Fukuoka’s Hakata Station) and air (approximately 1 hour and 30 minutes and slightly over 1 hour, respectively, from Fukuoka International Airport). Fukuoka is also well connected to international airports in Asia, Hawaii and Finland.

Recent years have seen the IT industry in Fukuoka prosper, with video game development companies and startups setting up headquarters and branch offices in the city. Games for Yo-Kai Watch, JoJo’s Bizarre Adventure and other popular series have been developed by companies with a local presence.

This industry growth has been made possible thanks to local initiatives. Since 2006, government offices and universities have worked together to turn Fukuoka into one of the world’s leading video game cities. The idea is to make the city the “Hollywood of games.”

Fukuoka has also been developing projects with the aim of attracting domestic and international startups and nurturing them as they grow. Starting a business in Fukuoka is relatively easy, and many IT startups have indeed taken advantage of the city’s initiatives to establish themselves locally.

Fukuoka Growth Next, a startup support facility, is home to many fledgling companies. It benefits from the city’s designation as a National Strategic Special Zone for Global Startups and Job Creation, which allows it to offer accelerator programmes and chances to collaborate with leading companies among other opportunities.

As previously mentioned, Fukuoka is a hot spot for video game development. CyberConnect2, developer of games in the Naruto Ultimate Ninja series and the JoJo’s Bizarre Adventure series as well as Kimetsu no Yaiba: Hinokami Kepputan, is headquartered in Fukuoka. Also in the city are Level-5, developer of the Yo-Kai Watch series; and Ganbarion, developer of various games based on the One Piece manga and anime series.

Other IT companies with a presence in Fukuoka include Vega Corporation, an IT business focused on e-commerce; and Nulab, which develops tools to improve work efficiency for creators. Both Vega Corporation and Nulab have extensive experience in hiring non-Japanese employees.

As Fukuoka and the rest of Kyushu are not as well known internationally as Tokyo, Kyoto, Osaka and Nagoya, you might be wondering what, exactly, awaits you.

As a whole, sweeping grasslands and mountainous volcanic terrain make up this hot-spring-rich island that boasts a climate ranging from subtropical in the south to temperate humid in the north. There is much to discover and enjoy, and extensive rail and bus systems make doing so easy.

In Fukuoka, a medium-sized city of 1.5 million people with ample parkland, historical sites and a lively atmosphere, you’ll find all the conveniences you’d expect in a city plus a lower cost of living than other major urban areas. The airport, harbor and main station are concentrated within a 2.5-kilometre radius, creating a compact city where you’ll have no need for a car to successfully navigate everyday life.

Not far from the city centre, stunning beaches and forested mountains crisscrossed by hiking trails welcome city dwellers ready for a break. It’s no surprise that Fukuoka is considered one of Asia’s most liveable cities and that it’s a top destination for international business conferences and events held in Japan.