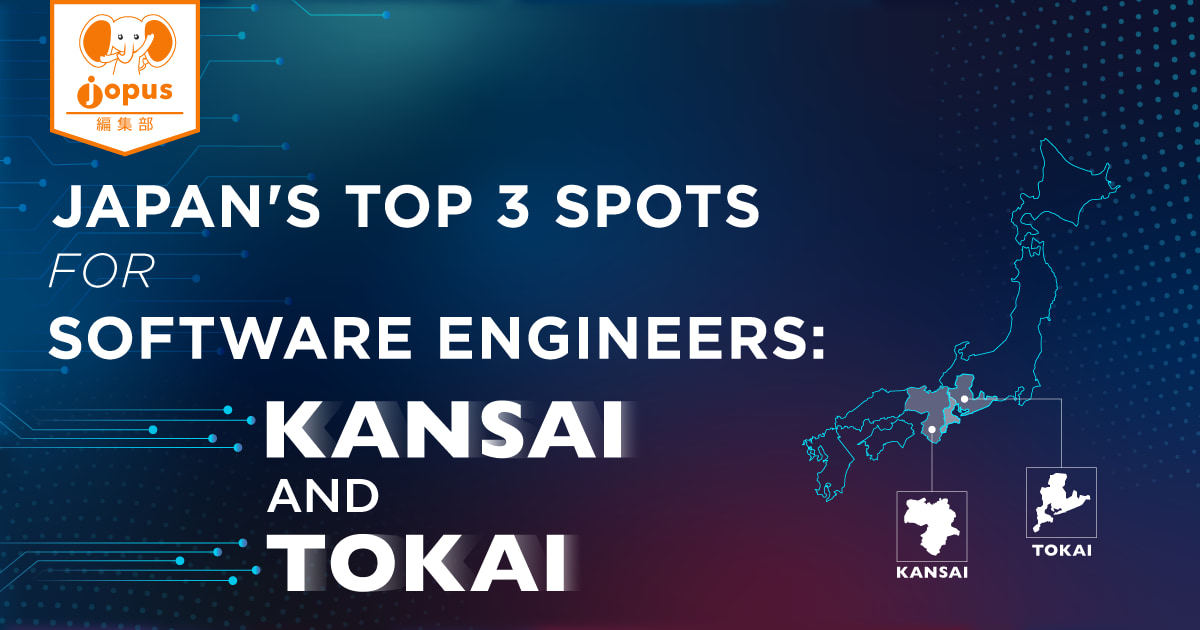 When relocating to a new country, it can be a challenge to decide where to set up a household. Knowing where you’re likely to find employment in your field helps narrow down your options. In this three-part series, we’ll introduce you to Japan’s top tech hubs where software engineers will find the best opportunities for work.

In part one of the series, we looked at Tokyo, the country’s capital city and home to many Japan headquarters for both domestic and international companies. In part two, we’ll be exploring the Kansai region and Tokai subregion, located to Tokyo’s southwest.

Kansai, also occasionally referred to as Kinki, is a region located in the central western area of Japan’s main island of Honshu. Consisting of Hyogo, Nara, Mie, Shiga and Wakayama prefectures plus the metropolitan prefectures of Osaka and Kyoto, Kansai is Japan’s second largest urban and economic region after the Greater Tokyo Area.

While there are fewer IT companies in Kansai than in Tokyo, Kansai—the cities of Osaka and Kyoto in particular—has been garnering interest as a way to take advantage of the region’s excellent human resources while leaving behind the high level of competition in Japan’s capital area.

An important point to note when looking at job postings is that salaries for the Kansai area are lower than those you’ll come across in Tokyo—by anywhere from 500,000 to 1 million yen. This can come as a shock, but there are reasons for the lower pay, most notably the lower cost of living.

Vibrant Osaka, the largest city in Kansai, is known for its cuisine, commerce and comedy. The lively city also boasts excellent accessibility, with two airports, one domestic and one international, located just 30 minutes and 1 hour, respectively, from Osaka Station. Nearby Shin-Osaka Station connects to Tokyo by high-speed Shinkansen in approximately 2 hours and 30 minutes, while the city itself is serviced by multiple train lines and a subway system.

Osaka is home to many subcontractors and major manufacturers, and the number of companies both IT and otherwise seeking software engineers is increasing. While there aren’t too many major IT companies whose head offices are located in the city, there are a growing number of startups and venture companies setting up shop.

Software engineers considering Osaka as home base have a wide variety of companies to investigate for compatibility, including Daifuku, a logistics system manufacturer with a terrific track record of hiring international students. The company is listed in the first section of the Tokyo Stock Exchange, meaning that Daifuku is a solid—and safe—choice.

Other companies to consider include Smaregi, a cloud POS system that creates and operates platforms to collect and utilize a wide variety of sales data; and major electronics manufacturer Panasonic, which also has a need for software engineers.

While Kyoto may be best known for its majestic temples and shrines, kimono-clad maiko and geiko and stunning bamboo-lined trails, it’s also a modern city home to a growing number of tech companies. Indeed, in recent years, an increasing number of companies have chosen to establish their headquarters in Kyoto rather than Osaka. That being said, the number is still relatively small, making Kyoto a little-known gem for software engineers in search of work.

Kyoto’s rich cultural heritage and general familiarity amongst international job seekers makes the city an excellent option for foreign-national software engineers. Add the white-sand beaches of the Tango Peninsula several hours to the north of the city, the vast fields of tea bushes to the south and the forested hills to the west, and a whole world of nature opens up as well.

Accessibility-wise, Kyoto is located approximately 2 hours and 15 minutes from Tokyo by Shinkansen, and just under two hours from Kansai International Airport by train. Reaching Osaka takes but 15 minutes by Shinkansen and 25 minutes by special rapid train.

Other companies with Kyoto offices include Sansan, a business-card-based contact management tool for companies that set up its Sansan Innovation Lab in Kyoto in 2018; and Money Forward, a provider of financial web services. Money Forward, like Line and Sansan, set up its Kyoto branch in 2018 and even has a dedicated recruitment blog, the web address for which can be found in the links section below.

Tokai, sandwiched between the Kanto and Kansai regions, is a subregion comprising Aichi, Shizuoka and Gifu prefectures of the Chubu region and Mie Prefecture of the Kansai region. The subregion is centred on Aichi Prefecture, and Aichi’s capital city, Nagoya, is not only Tokai’s largest and most prominent city but also one of Japan’s three major metropolitan areas.

Aichi is well known as a major player in the automobile industry, with Toyota Motor Corporation calling the prefecture home, and as one of Japan’s most important manufacturing centres. Increasingly, the area is also becoming known for its growing number of IT companies connected to manufacturing.

In Nagoya, software engineers will find SYS Holdings, which provides information system solutions, information system development and information technology consulting among other services. The company develops IT systems for both major manufacturers and government offices and boasts a base overseas with experience recruiting international students.

Ateam, which develops and operates consumer-oriented products for smart devices, and which has a good track record of hiring foreign nationals, is headquartered in Nagoya.

The major cities of the Kansai region and Tokai subregion offer many of the same big-city perks as Tokyo but on a smaller scale. Transportation networks easily link the cities to each other and to Tokyo and beyond. A variety of IT companies provide interesting opportunities for software engineers looking to immerse themselves in Japanese culture while working in an international environment.