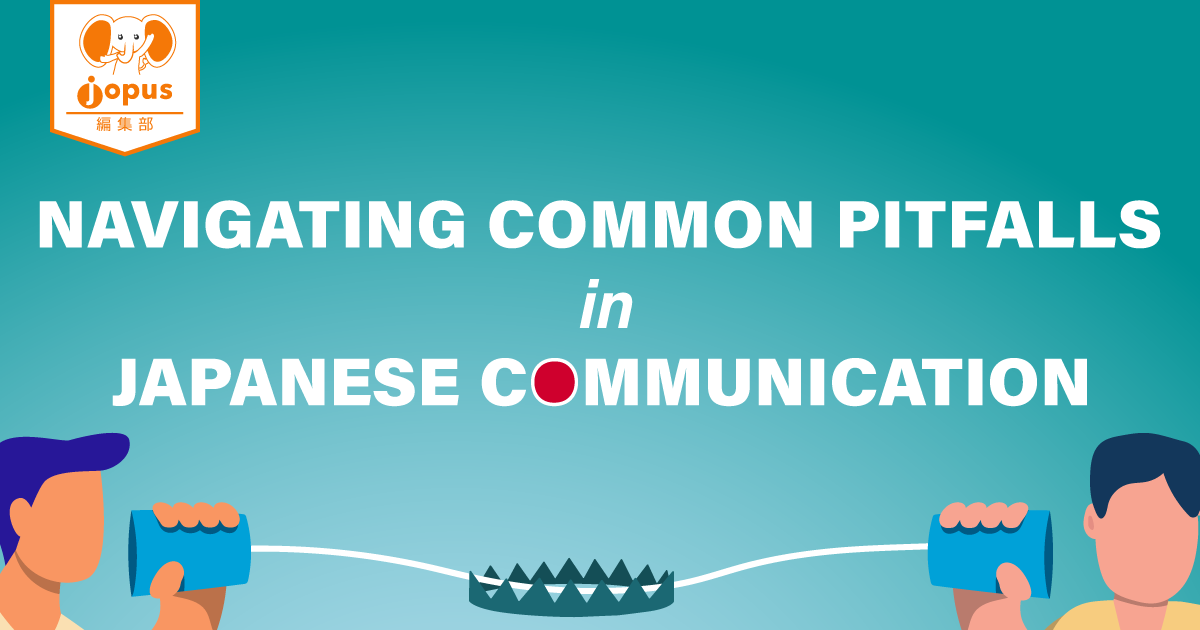 With a unique set of unspoken norms, accepted practices, and employee mindsets, the Japanese business environment can be quite challenging to the unaccustomed. Whether you’re still contemplating working in Japan, actively looking for work, or already employed in a Japanese workplace, it’s good to be aware of these characteristics to help avoid misunderstandings in the workplace.

In this article, we’ll examine a few of the common pitfalls in Japanese communication style in particular, and offer tips on how to navigate them for better working relationships.

If you’ve studied a little Japanese already, you will probably be familiar with how much nuance can vary within context. But if you are still developing basic Japanese listening and comprehension skills, remember that the words used around you may not mean what you initially may guess.

As an often-cited example, the response “hai” does not necessarily mean “yes.” Rather, “hai” is frequently used to express “I hear you” or “I understand what you’re saying,” without necessarily indicating agreement. The same is also true for the phrase “wakarimashita,” or “I understand,” which is commonly interjected during conversation. Instead of focusing on individual words, try and listen to the entire message that is being shared, and look for non-verbal cues of the speakers and listeners around you as well.

Search for any information about Japanese workplace culture, and you’re bound to come across the phrase “high context culture.” This refers to the fact that Japan’s very homogenous society and largely shared cultural background among its citizens mean people are generally “on the same page.”

In Japanese society, less needs to be orally expressed, leaving a great deal of meaning to be inferred. The concept is aptly summarized in the Japanese saying, “hear one, understand ten,” which stands in stark contrast to most Western countries, where all ten things need to be explicitly stated for full understanding. Given this style of communication, understand that as a non-Japanese person who has not grown up within that shared background and culture, it can be very easy to miss out on some of the things that are left unsaid.

Interestingly enough, even some Japanese people struggle too, as, after all, Japanese society retains its own elements of diversity with different age groups and regional backgrounds, etc. Don’t hesitate to ask more questions to follow up about matters that are unclear, or reach out to your coworkers whenever you struggle to catch the full gist – they may be wondering about the same things!

Punctuality Is a Virtue

In a country where trains and buses run on time and the average delay on the popular Tokkaido Shinkansen is just 0.9 minutes, it’s no understatement to say that punctuality is highly valued in Japan. But what exactly constitutes punctuality? In some countries, showing up for a meeting the same time it is scheduled would still be considered on time.

In Japan, it may help to remember that “early is on time, and on time is late.” When a start time is given, Japanese people prepare in advance of that moment. If the workday begins at 9:00 am, employees typically arrive much sooner than that (at least 10-15 minutes but perhaps more). A meeting scheduled for 2:00 pm will see participants gathering about 5 to 10 minutes beforehand, with the meeting commencing the very moment the clock strikes the hour.

Practicing punctuality is a form of non-verbal communication that demonstrates your commitment and work ethic far better than any words could ever do. But don’t despair if you do happen to be delayed. The key to preventing misunderstanding even in that situation is to let others know in advance.

Generally speaking, most Japanese companies are quite hierarchical in nature. There is usually a very clear chain of command within the organization as to who manages what. Even in companies with open office layouts, where employees from different groups may all sit and work together in the same space, administrative divisions between teams and hierarchies still exist.

Being within such close proximity to coworkers or having email, chat and numerous other digital tools at your disposal could make it tempting to reach out to employees outside your department for work-related matters. Some companies such as tech startups may encourage this practice, but it’s best to check first. Your company may prefer that you approach your immediate supervisor first, who will then make the necessary arrangements to discuss with the supervisor of the person in the other department.

Another common occurrence in the Japanese workplace is being asked what might come across as rather personal questions. For example, soon after joining a company, you may find coworkers openly asking about your age. You may even be asked about your family background, your relationship status or how you spend your free time.

While such personal questions may sometimes be considered rude in other countries, it’s important to understand why they are being asked in Japan. Age in particular is a crucial factor in determining seniority, and coworkers seek this information soon after an introduction to properly relate to you socially (and conversely, it will help you relate to them just the same!).

Other personal questions may stem from innocent curiosity about a non-Japanese person, and not some national tendency to be nosy and invasive. Of course, you are under no obligation to divulge details of your personal life, so it may help to prepare some ready answers for such questions in advance.

When you’re new to the Japanese working environment, many aspects can seem utterly bewildering in the beginning. If you ever feel confused about communication within your workplace, take solace in the fact that you’re not the first and you certainly will not be the last to feel that way. It’s important to recognize that this is part of the process of adapting to a foreign culture, and that with a good measure of both patience and perseverance, you’ll slowly learn to navigate the fascinating and multi-layered world of a Japanese organization.