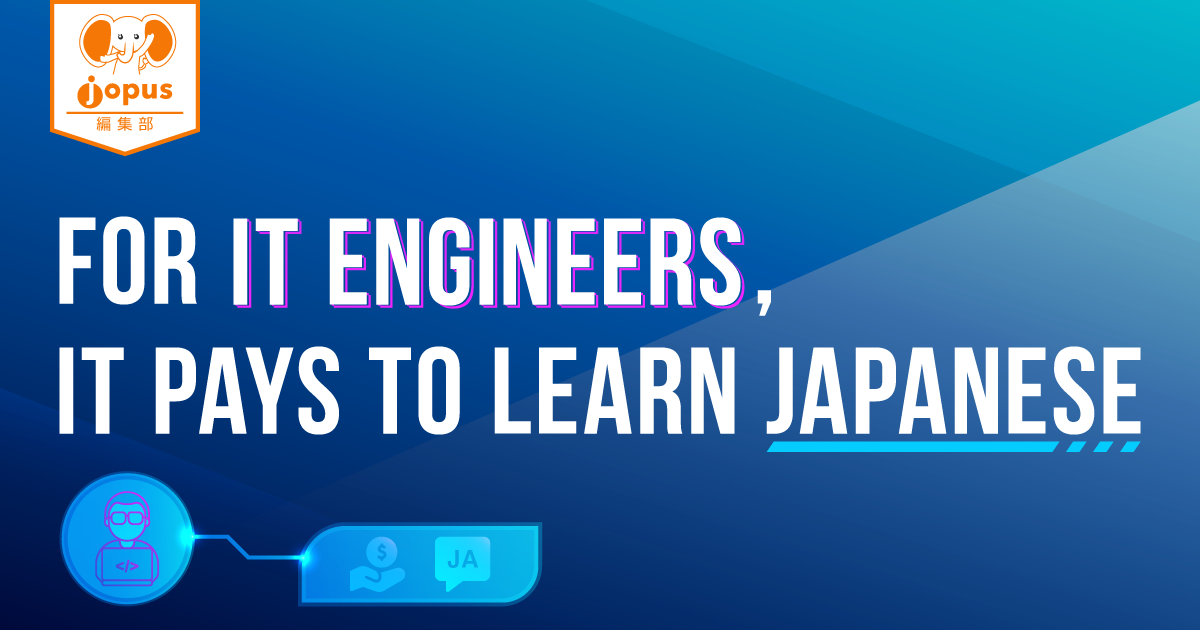 Non-Japanese software engineers are in demand!

With a solid reputation as a high-tech nation and remarkable technological achievements under its belt, Japan has long had a need for engineers. In recent years, Japan’s IT market has been booming, spurred on by global technological trends in areas such as AI, web-based services, the internet of things (IoT), online streaming, and mobile app development.

Now more than ever, there is a great need for software engineers and other IT professionals. According to reporting by Japan’s national broadcaster NHK, more than half-a-million IT positions will need to be filled by 2030. Yet Japan’s birthrate has been steadily declining since 2010, resulting in fewer native-born workers across all industries.

The combination of these two factors means that Japan’s IT sector is desperate for foreign talent.

Software engineers may find that Japanese skills are less of a prerequisite to finding employment in the IT sector compared to other fields. This is partly due to the predominance of English in areas such a programming, the realization that English is a global language for international business, as well as acceptance that Japanese speaking foreign workers are in scarce supply.

Having any degree of Japanese language ability will certainly make you stand out as a candidate for jobs; the more you know, the more desirable you’ll seem to a prospective employer.

Your potential coworkers, especially younger Japanese, may have studied English and can read or write to a certain extent. But being able to communicate with them in Japanese will facilitate relationship-building and make work flow more smoothly, especially in making sense of IT-related documentation written in Japanese such as manuals and specifications.

But beyond work, you’ll find that Japanese skills make your life in Japan overall much easier. Having listening and speaking skills at the very least will help in almost every aspect of your personal life, be that dining out, traveling, and pursuing your hobbies or other interests in Japan.

What does it mean to learn Japanese?

Of the four components to language learning – listening, speaking, reading and writing – English speakers may find that some aspects are easier than others.

With listening and speaking, there are fewer sound combinations than in English (and most other Western languages) so getting the hang of pronunciation is not as challenging as, for example, learning English as a Japanese person!

Writing and reading, however, typically have a higher learning curve for most English speakers. You’ll need some patience as you adjust to a writing system that is based on logograms rather than letters in an alphabet.

Written Japanese is a combination of Chinese characters known as kanji, and hiragana and katakana, syllabic or phonetic scripts that each have 46 basic characters. (Romaji, by the way, refers to the phonetic writing of Japanese words using English letters.)

About 2,000 kanji are considered daily-use, though there are many more used in names of people and places! Meanwhile, hiragana, with their fluid, curvy shapes, are generally for grammar and pronunciation guides, while the more angular katakana are typically used for foreign loan words and some onomatopoeia.

How should I learn Japanese?

Knowing yourself, including the study methods that suit you best, is key to your approach in learning Japanese. Some people are motivated self-learners, while others may appreciate the structure of a formal course. For this article, we’ll look at methods available for home study that fit either style.

Self-learners have a variety of excellent options to choose from. Starting from the traditional, yet time-tested route, there are numerous textbooks geared toward self-study. Textbooks often specialize in certain areas such as reviewing grammar and learning kanji characters.

Websites are another great resource, especially when they allow you to connect with a community of others studying Japanese. Some may accompany textbooks, or be stand-alone sites designed specifically for self-studying.

Finally, take advantage of mobile apps for smartphones and tablets. Apps offer both portable and interactive ways to continue your study, not to mention quite sophisticated approaches to language learning in general.

If you appreciate having the guidance of an instructor, consider enrolling in online Japanese language schools. Online schools take students from all over the world, so you can study wherever you happen to be.

Most schools offer both group lessons and personalized 1-on-1 instruction using video conferencing as well. Crucially, a language school offers the valuable opportunity to converse with native speakers that can provide immediate feedback, so you can take a practice run at real communication in Japanese.

Working with an individual instructor can really help strengthen your weak areas, be they grammar or reading and writing.

The Japanese Language Proficiency Test, or JLPT for short, is probably one of the most well-known Japanese language tests. It’s divided into five different levels, each with a corresponding amount of requisite vocabulary and kanji. Note that the top-tier N1 or N2 grades are generally considered to be the levels at which you can communicate sufficiently in a Japanese work environment.

Regardless of level, all tests are multiple-choice format, covering reading, listening and grammar, which means you need not worry about hand-writing Japanese (though there are other tests for that too!).

While dedicated study should certainly be the foundation of your approach, it’s equally important to enjoy learning Japanese too. Here are just a few of our suggestions for making Japanese both an integral and enjoyable part of your daily life:

The following website hosted by The University of Tokyo’s School of Engineering, offers a collection of links to Japanese language learning tools: