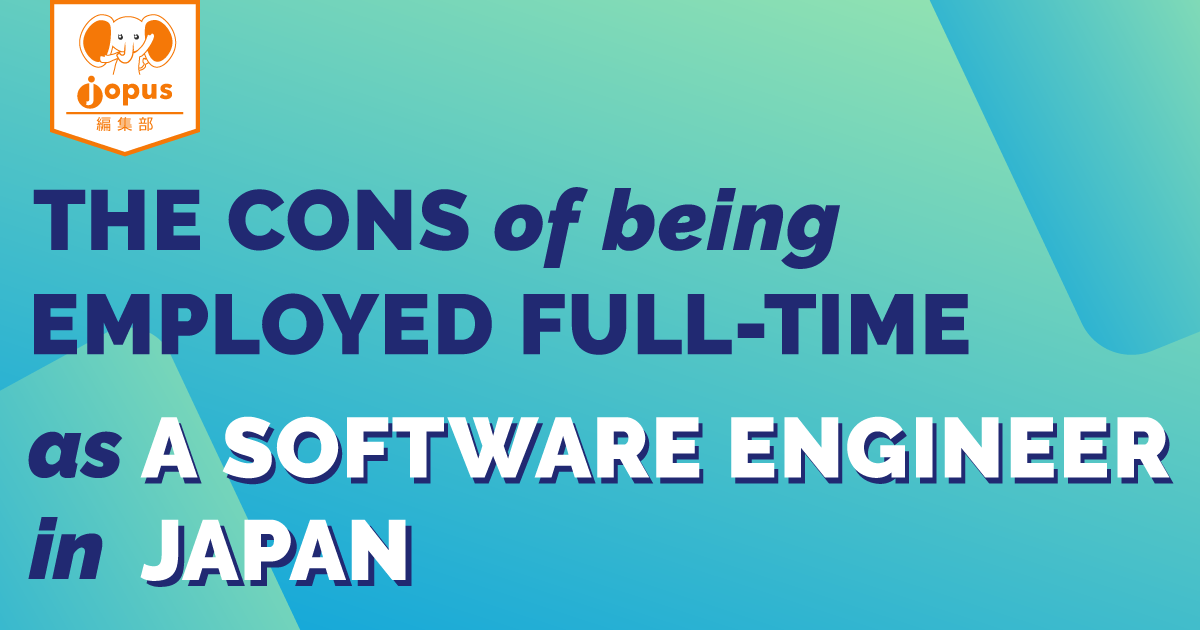 Alright, so you’re thinking about working as a software engineer in Japan. With a large demand for workers in Japan’s tech industry, many types of employment are possible, such as working as a freelancer, temp staff, or full-time employee. Full-time employment is certainly the most common approach, but this option can present some unique challenges to foreigners, especially if you’re new to working in Japan. In this article, we’ll look at some of the cons involved with full-time time employment.

Perhaps more than any other factor, Japan’s unique business environment can be one of the greatest challenges for foreign employees. Simply put, Japanese companies operate very differently from companies in the West. For example, group consensus is very important in decision-making, and the process of gaining that consensus can be time-consuming. Seniority is typically given more importance than meritocracy. Culturally, the company and the group takes precedence over the individual.

Japan’s tech industry is quite broad, with old, established companies that are major players in the economy, as well as younger, startup-type organizations engaged in areas such as e-commerce and app development. That breadth makes it difficult to characterize the industry overall, but continuing with the theme above, some Japanese companies are a little slower than those in the West when it comes to innovation.

Generally speaking, Japanese companies prefer to take their time before trying out new ideas. Their cautious approach favors time-tested, proven strategies and technologies, rather than taking chances on risky new ideas. For a software engineer who sees the rapidly changing IT industry and is eager to work with the constant innovation coming out of the West, it can be frustrating to see your company taking more of a wait-and-see approach. Prepare yourself for the bureaucracy of the Japanese working environment and the slow pace of change.

While official work hours do exist on paper, in practice, overtime is quite common in Japan’s tech industry. You may encounter either of two situations: 1) being stressed and overworked because of a shortage of staff, or 2) simply feeling pressure to put in long hours because everyone else around you is doing likewise. We’ve written before about Japan’s exhausting work culture (see our related article: The Disadvantages of Working at a Tech Company in Japan), and while your company may not be as affected by this as others, be sure to find out in advance what typical workdays are like, and how often overtime or perhaps even weekend work might be required.

Another possible drawback to full-time employment may be the commuting involved. The majority of Japan’s tech companies are located in major cities such as Tokyo and Osaka, and with the high costs of living in central urban areas, you will probably have to endure crowded trains on the way to and from work.

If you are fortunate enough to live close to your place of employment, or your company is very generous with flex time or allows telecommuting, this may not be too much of an issue. But even then you may need to put in some face time at the office on occasion, so be prepared to battle the crowds.

On the positive side, jobs in the tech industry tend to be some of the highest paid in Japan. According to a 2019 survey from recruitment firm Robert Walters, salaries for experienced engineers range between 6 million to 15 million yen per year. Remuneration in that range is sufficient for the cost of living in Japan’s larger cities, and even lucrative if you’re in a slightly more suburban area.

Nevertheless, you may find that Japanese salaries for software engineers are lower than in other countries. That’s not to say that there won’t be other benefits, such as commuting or housing allowances, but on a strictly by-the-numbers basis, salaries Japan across the board tend to be a little less than in the West. If you’re the type of person that really wants to maximize your earning potential and be paid as much as you are worth, full-time jobs could be a bit of a disappointment in Japan.

Japanese companies tend to regard full-time employees more as flexible, generalist human resources than specialists. Rather than hiring specific people for specific tasks, companies often take on employees with the expectation that they will handle whatever work is needed at that time. To that end, job titles are not as much of a focus – sometimes they aren’t even assigned! The department or group to which the employee belongs is generally more important.

During your job search, you’ll probably see a job description given for a certain position. But if you are hired for that position, be prepared that your actual day-to-day responsibilities may not include everything in that position, or may even change to other duties that were not even listed. Once you’re hired, it will be difficult to turn down work requests simply because it’s not your job.

Additionally, Japanese companies often transfer their employees around to different departments or even locations, a practice known as “tenkin” (転勤). Companies rotate employees every few years to give them more exposure to different aspects of the business. On the plus side, this can make employees more well-rounded, but on the minus side, this means that positions are not necessarily filled by the most qualified people. Whether you agree or disagree with this approach, keep in mind that your position, department or even work location could change.

Even in the West, the tech industry is not particularly noted for its diversity, but this is all the more apparent in Japan. Employees in Japan’s tech industry are predominantly Japanese and male, though it’s worth nothing that some Japanese tech companies are proactively hiring more foreign workers and more female employees.

If having diversity or a workplace that is accommodating of different cultural norms is important to you, try and find out in advance about how many other non-Japanese employees are working at the company, especially in management positions, during your job search. This will give you an indication of the workplace environment.

In this article we’ve looked at some of the drawbacks to working as a full-time software engineer in Japan. It’s important to remember that the information mentioned above will certainly not always be the case, so don’t let this deter you from seeking a full-time position. Instead, let it serve as a guide in your job search, particularly in the interview process when you have a chance to speak with company representatives themselves and address any possible red flags.