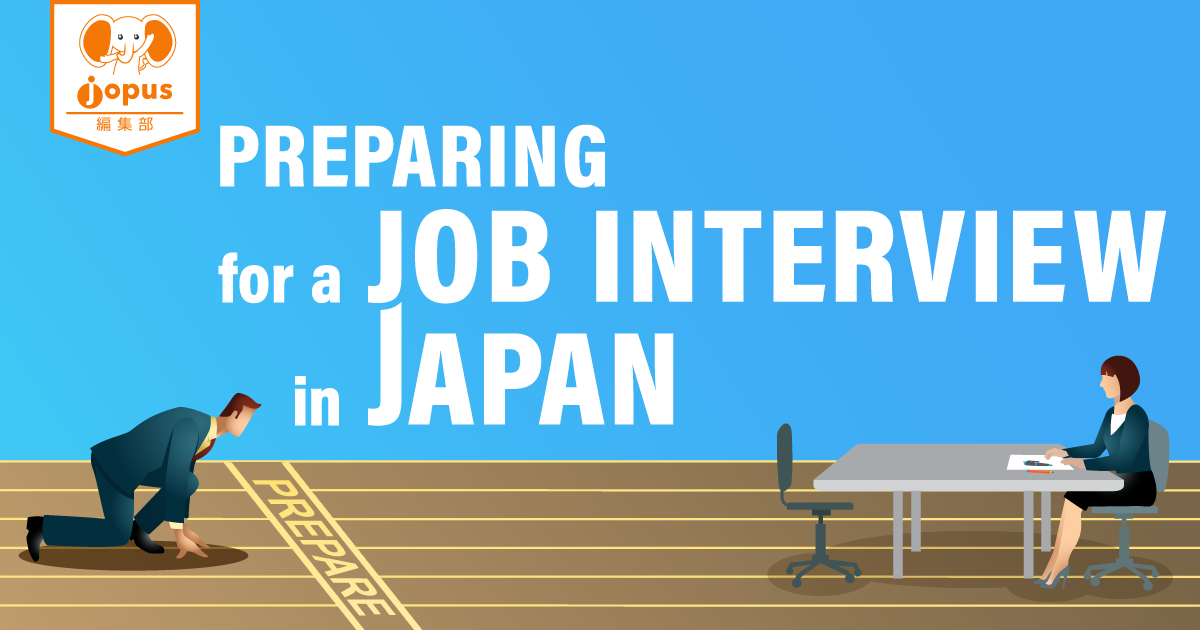 Even as the way we search and apply for jobs has been constantly changing with advances in technology, the job interview, whether conducted in person or online, has still remained a crucial element of the hiring process.

To a large extent, interviewing for jobs in Japan is much like anywhere else in the developed world. However, as a non-Japanese applicant, you may also be asked questions that seek to understand your Japanese competency or your ability to adapt to a foreign culture.

Below, we’ll provide 14 of the most common questions that you might encounter when applying for a position within Japan’s tech industry. We’ll also include some sample answers as a reference for how to respond, though your responses will vary, of course.

Question 1. What made you decide to come to Japan?

I became interested in Japanese culture after watching Japanese movies. I had also often heard from my friends who worked in Japan that Japanese people were very diligent, so I came to Japan thinking that I could learn something from the Japanese mindset.

Question 2. Why did you want to work in Japan?

I came to Japan because I wanted to make use of the Japanese I have studied and reach a more fluent Japanese level. I have been studying Japanese since I was a university student and wanted to work for a Japanese company.

Question 3. Please tell us briefly about your work experience up to now.

I came to Japan five years ago, and at my first company, I was in charge of front-end work for various projects over a span of two years at a system engineering service company. Then at my second company, an e-commerce business, I worked as a lead engineer for a year and also managed five members as a team leader.

Question 4. What was the reason you joined your previous company? Please tell us why you changed jobs.

I wanted to increase my expertise in e-commerce, so I chose a company where many non-Japanese were also working. My reason for changing jobs this time is that I want to do engineering in a highly specialized field of e-commerce and in an environment where I can use more Japanese.

Question 5. What kind of impression do you have of working for a Japanese company?

Before coming to Japan, I was worried about whether I would be able to cope with the differences in work style from my home country. However, after actually working here, I came to feel that a culture of emphasizing teamwork is a good fit for me.

Question 6. How long have you been studying Japanese?

I’ve been learning Japanese for about six years now. I also majored in Japanese as a university student. In 2020, I received a score of N2 on the JLPT (Japanese Language Proficiency Test).

Question 7. How did you learn Japanese?

I took Japanese language classes in college for my major. I also worked on improving my listening skills by watching anime and other movies in Japanese. After coming to Japan, I practiced my speaking skills by talking with Japanese people. I often participated in company events and drinking parties in order to increase opportunities to actively talk with Japanese people outside of work.

Question 8. Which of the following do you think you are best at: speaking, listening, writing, or reading Japanese? Conversely, which is your weakest area?

My strongest skill is writing. In engineering, there is a lot of chat communication, so I used to type in Japanese. What I am weakest at is speaking. The companies I’ve worked for have had many non-Japanese employees, so communication in English is more common than in Japanese. I am trying to improve my speaking level by conducting one-on-one sessions with Japanese employees.

Question 9. In what kind of situations have you used Japanese in your work so far?

In both my first and second companies, I communicated with Japanese employees in the company through chat rooms as well as verbally. However, since there were many foreigners on the team, there were days when I only used English.

Question 10. What programming languages have you used in your work so far? What language are you good at? How would you rate it out of 10?

Java, JavaScript, and PHP. The language I am best at is Java and I would give myself a rating of 8 out of 10.

Question 11. What is the scale of the service you were in charge of? What were the positions and tasks you were responsible for in that project?

The scale of the service was 400,000 PV (page views) per month. Also, the positions I was in charge of included system design, operation, and system testing.

Question 12. Have you ever experienced any failure in your previous projects? How did you learn from it?

On one occasion I was not able to adequately manage the progress of the other team members. I found that this situation was caused by a lack of communication, so I conducted weekly meetings with the members to ensure mutual understanding. As a result, we were able to proceed with the project as planned and achieve great results.

Question 13. Have you ever worked with a Japanese engineer? Did you have any problems?

I have worked with Japanese engineers before. The problem was that I did not understand the technical terms of the service I was in charge of. I looked them up in the dictionary each time and proceeded with the work, making sure that there were no unclear points before doing the work.

Question 14. Do you have any questions for us?

Alright, we don’t have a sample answer for this one, but be sure you do have a question prepared. Asking your interviewer(s) a few questions will demonstrate your interest in the position and make you a much better candidate.

Remember that a job interview is a chance for the company to get to know you and vice versa. Even if you feel nervous, don’t try to be someone you are not – have confidence in your work experience and qualifications. You also want to determine if the company and/or position is a good fit for you, which is why having questions prepared can help address any potential red flags. Relax and do your best!