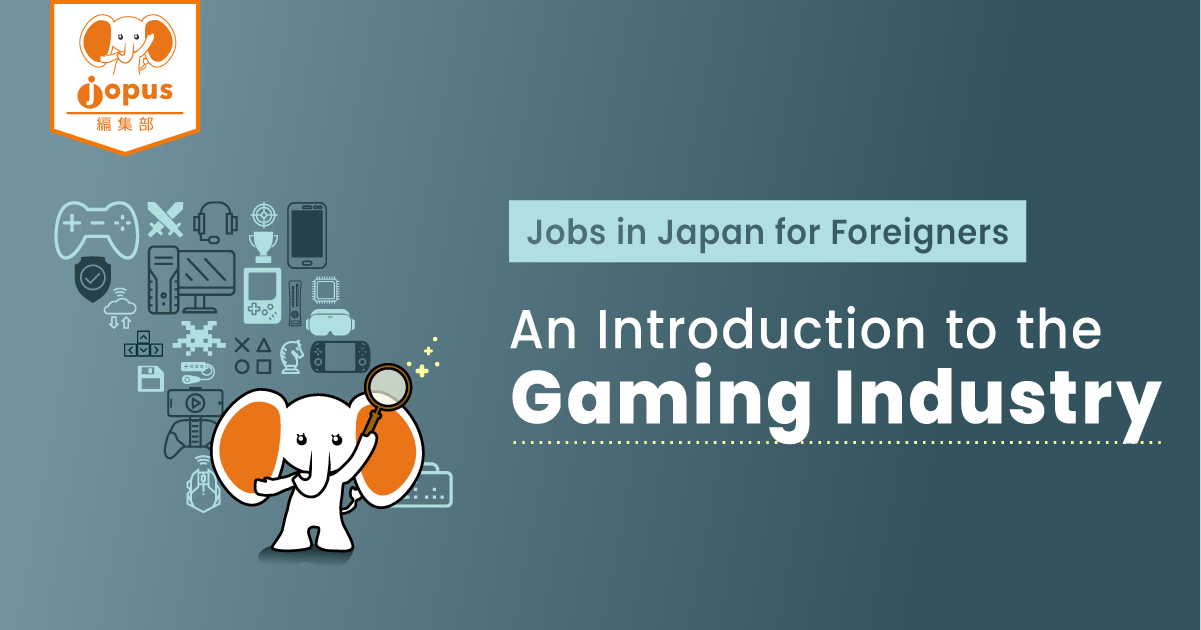 Among international job seekers, the gaming industry is a popular field. Many of our readers might currently be considering a career change to this industry. In this article, we will introduce jobs in the gaming industry and the characteristics of people who would fit this line of work. If you are interested in this industry, please use the information in this article as a personal reference.

What is the gaming industry?

The gaming industry is an umbrella term for businesses that develop/sell gaming hardware or software. Within the industry are software developers that plan and produce games, publishers or hardware companies that deliver said games, and software houses that provide technology and workers under a subcontract. Due to the widespread use of smartphones and increased efforts in virtual reality games, the industry is expected to grow even more in the future.

Japanese anime and games are becoming more popular not only in Japan but also all over the world. As such, the gaming industry is popular among foreigners as it is among Japanese job seekers. The field, therefore, can be considered highly competitive. With the proliferation of online games and the global releases of Japanese games, the industry is undergoing globalization. A need for foreign workers in jobs such as translation (or localization) is also rising alongside this movement. Except for localization positions however, many companies seek work-ready employees. Companies will rarely hire inexperienced workers who are not new graduates.

Annual salaries in the gaming industry

Jobs in the gaming industry

There are various kinds of occupations in the gaming industry. Among these, game planners, game directors, game producers, game programmers, game designers, and debuggers are jobs that require specialized knowledge to obtain a visa. Therefore, it is necessary to major in engineering- or design-related studies at a university or a Japanese vocational school for these positions. Conversely, localizers who use their native language at work can obtain a work visa without schooling. Below, we introduce the job responsibilities of different occupations within the gaming industry.

Game planners plan and structure games during the production process. The main task of a game planner is to analyze needs and subsequently plan game concepts and outlines. Companies will seek people who have the ability to make hit titles, are adept at worldbuilding, have presentation skills, and can communicate with others inside and outside the company.

The main job of a game producer is to direct entire game production processes. They handle budgeting and securing talent, managing schedules (which include development processes), and promoting gaming products. Game producer roles are commonly filled by experienced game directors who are promoted to this position.

Game programmers program a game itself based on specification documents. From planning character movement and user screens to constructing servers, they handle a large variety of developer tasks. Those who do not have experience in the gaming industry may still find themselves at an advantage when changing jobs if they have programming experience in another industry.

Debuggers test for bugs or errors and verify that a game works as designed. They play the games being produced and check in detail whether any problems arise.

People who are fit for the gaming industry

Those who like to make games and are interested in creating works will find a good fit with the gaming industry. Additionally, highly imaginative people who often conjure ideas such as designs may also find themselves playing active roles in this industry.

Trends change rapidly within the gaming industry, so companies work to develop new hit titles or brush up on existing ones daily. As such, this industry is also a good fit for those who enjoy following trends or collecting information. We also recommend this industry to those interested in new technologies as there are many opportunities to be involved with the latest ones (e.g., 3D computer graphics and virtual reality).

Those who are confident in their stamina

Right before the release of a game, employees need to concentrate for long hours to meet deadlines. Unexpected situations such as bugs or sudden content changes often occur, so this industry is a better fit for those who can overcome difficult situations and have stamina.

Below, we recommend some recruitment agencies for those who want to work in the gaming industry.

レバテックキャリア(Levtec Career) is a recruitment agency operated by Levtech Co., Ltd. They specialize in supporting the career change of engineers and creators in the IT and web industries. Their services include shokumukeirekisho and Github revision for experienced engineers. They also have achieved high placement rates coupled with post-placement follow-up systems designed for engineers and creators.The agency offers a top-class number of job listings in the industry and handles many opportunities undisclosed to the public. This is an agency one will want to register with if they are an engineer or creator thinking of transitioning to the IT or web industries.

Also operated by Levtech Co., Ltd., レバテックフリーランス (Levatec Freelance) is a job portal for freelance Software engineers and designers. The site has more than 1,100 job opportunities—the largest number of listings in the industry. Coordinators familiar with IT/web industry trends and developer work environments will introduce you to openings that perfectly fit your needs. In addition, compensation is among the highest in the industry and will come within 15 days. We recommend registering with this service if you would like to work freelance as a Software engineer or designer.

LIVESENSE is a recruitment agency specialized in the IT and web industries. It is operated by Livesense Inc., which is also known for running Japan’s largest employer review site “転職会議.” The agency has many undisclosed listings for engineers and designers at popular startup companies. Consultants who have inside knowledge of the IT and web industries provide support such as job introduction, interview preparation, and income negotiation. We recommend this service to those who want to talk with consultants familiar with the IT industry and its latest technologies. We also recommend this agency to inexperienced individuals who want to make a career transition to the IT industry.

G Talent is a recruitment service for foreign software engineers and is operated by Bizmates, Inc., which has the highest shares in online business English conversation lessons. Using this online English conversation network, G Talent introduces opportunities at popular large companies, foreign-affiliated companies, and startups proactively hiring international job seekers. Furthermore, consultants familiar with the IT industry and its technologies provide solid support, including job introduction, interview preparation, and follow-ups after placement. This is a service one should register with if they are an IT professional looking for jobs in Japan.

Geekly is a recruitment agency specialized in the IT, web, and gaming industries. It is operated by Geekly Co., LTD. Consultants at Geekly gain information directly from the companies seeking talent. In addition to an abundance of job listings, the service offers consultants who provide full support such as salary and condition negotiations.

With the spread of online gaming and the popularity of anime and games, the Japanese gaming industry is becoming increasingly popular among foreigners. Many companies seek work-ready people, but there are also jobs in which international job seekers can capitalize on their language skills. Some jobs require specialized knowledge to obtain work visas, so it is best to think about what job you would like to work in if you are interested in the gaming industry.

List of ways to look for jobs in Japan